I love Peter Adam’s quote “Great Photography is about depth of feeling, not depth of field”. Photography is a blend of technology and art, but it can be tempting for the preoccupation with technology to distract from what you from the emotions and stories that you are trying to convey through your art. More important than what gear you choose to use is that you know how to use it – that it is familiar and intuitive. You don’t want to be caught having to ask the guy next to you on safari, as the lion closes in on its prey, “does ‘P’ stand for professional”??

I try to avoid talking too much about gear because to me it is secondary. But embarking on the pursuit of photography does involve decisions about what equipment to invest in – we have all been there – and I do get asked quite often what equipment I use. So here it is, a post about what  put in my bag on a typical assignment.

Finding the “perfect” backpack has been an ongoing quest for me. The impetus for this post was receiving a new MindShift Gear backpack. MindShift is a new company founded by the creators of Think Tank Photo and respected conservation photographer and friend Daniel Beltrá – and as soon as I heard about these new bags I got excited. I chose to test their FirstLight 40L bag because it was large enough to carry the bodies and lenses I would need on assignment but small enough to be carry on compatible. This is really important to me as virtually all of my assignments involve air travel. The bag is solidly built and incredibly spacious, with room for two bodies, three flashes (standing upright – it’s a deep bag), at least 5 lenses and other accessories. It is incredibly comfortable – with numerous adjustment points for different body types and torso lengths – and this is a huge plus because I spend a lot of time lugging my gear around rainforest and up mountains. There is also a rain jacket for the bag – a big plus for the rainforest. Oh, and the front pocket accommodates laptops up to 17″ – another important feature.

So, what gear do I put in here? You will notice that my bodies and lenses are exclusively Canon. Why Canon? Because when I purchased my first Digital SLR in 2007 my coin flip landed on Canon (the other side of the coin was Nikon). Canon is the equipment I have grown most familiar and most comfortable with, and this is what is important to me (and, of course, the investment in bodies and lenses).

I carry two camera bodies. I currently use the Canon 5D Mk III as my primary body (in this image it is my 5D Mk II as my Mk III is in for cleaning). The Mk III is more weather sealed than the Mk II, and suits most of my assignments in wet and humid places. I always carry a backup body in case of technical problems. In the rainforest of Costa Rica my Canon 5D Mk II died – luckily I had a backup 40D with me, which has been a work horse.

On the camera in the bag is the 24-70mm f/2.8L Canon Lens. This is my walk around lens. It is versatile and fairly fast with a maximum aperture of 2.8, and I use it for everything from landscapes to portraits. The only real down side to this lens is the weight – this is a really heavy lens!

I usually also carry a wide angle lens – I use the 17-40mm f/4L. When I purchased this in 2007 I chose this over other wide angle lenses because it was sealed and had a relatively close focusing distance of 28cm, which I thought would open up more opportunities for close-up work. It was also a lot cheaper than the 16-35mm f/2.8.

I also carry a 12mm extension tube that allows me to convert my 17-40mm into a wide angle macro lens for environmental portraits of smaller creatures. Below is an example of a wide-angle macro shot of a Solomon Islands Eyelash Frog with this setup. 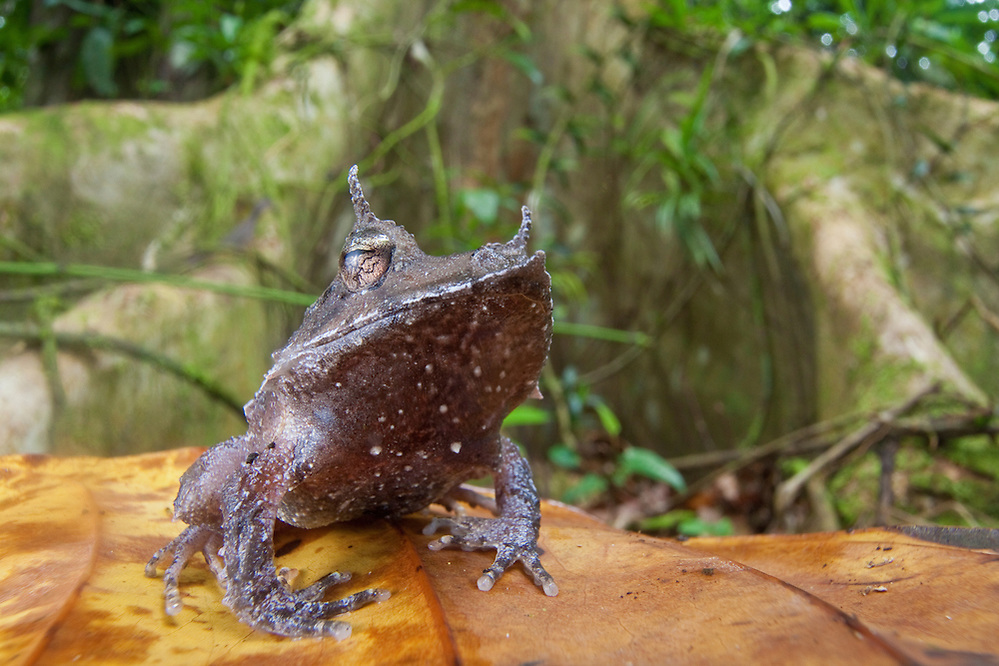 Next up, the Canon 100mm f/2.8L macro lens. With 1:1 magnification and a minimum focus distance of 30cm, this is essential for much of the close-up work in which I want to isolate the subject – and also doubles up as a nice portrait lens. It’s one of my most frequently used lenses. Below is another shot of a Solomon Islands Eyelash Frog through this lens (the lighting is discussed below). 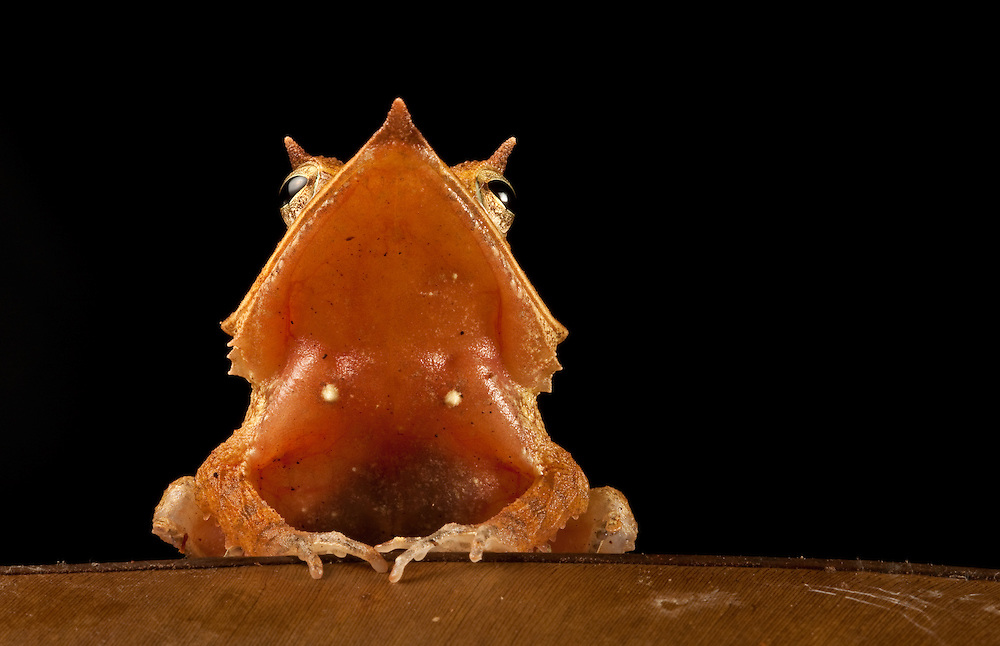 I almost always carry a telephoto lens – in the bag is my Canon 100-400mm f/4.5-5.6L lens. I bought this one before my first trip to East Africa – the longest lens I used for many years was a 70-200 mm, but I wanted more versatility to shoot animals from further away. Without wanting to mortgage my house to buy a lens, this was the best most affordable lens for me. When I see other people on safari with lenses the size of traffic cones, it makes my lens look a little inadequate. But I think limiting myself to 400mm also forces some more creative solutions to photographing wildlife in the context of their environment. The below shot, for instance, was shot at 200mm. There may have been a temptation, had I had a 600mm lens, to photograph the rhino’s eyeballs. But with 200mm at my disposal, I created a frame that placed the animals in the context of their environment. 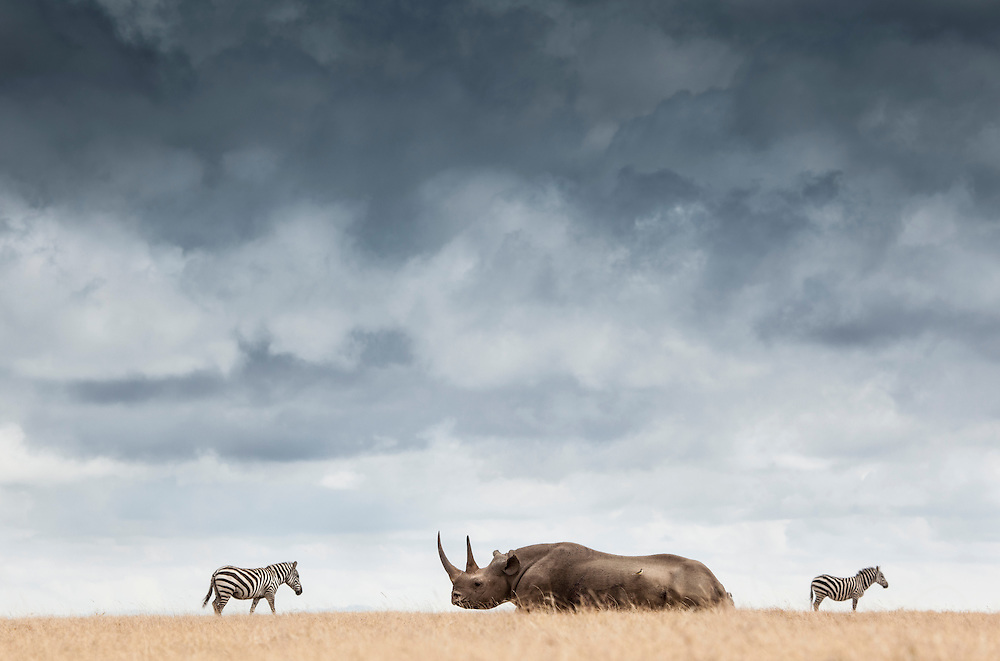 Lastly, I sometimes also carry the 24mm 1.4L lens. This is an incredibly fast lens. Being able to shoot relatively wide with a very shallow depth of field can help isolate subjects whilst providing context – it’s good for situations where you can move freely and get up close to your subjects.  I think of this as a luxury item – it’s not an indispensable addition to my toolbox, and I felt a bit indulgent when I bought it. There is something about prime lenses, and the fact that you need to actually move to frame the shot, that makes them satisfying to work with. The lens also allows me to shoot in very low light. Below is a shot of a cuscus in the Solomon Islands shot with this lens set to an aperture of 3.5 (sometimes 1.4 is just too shallow a depth of field). 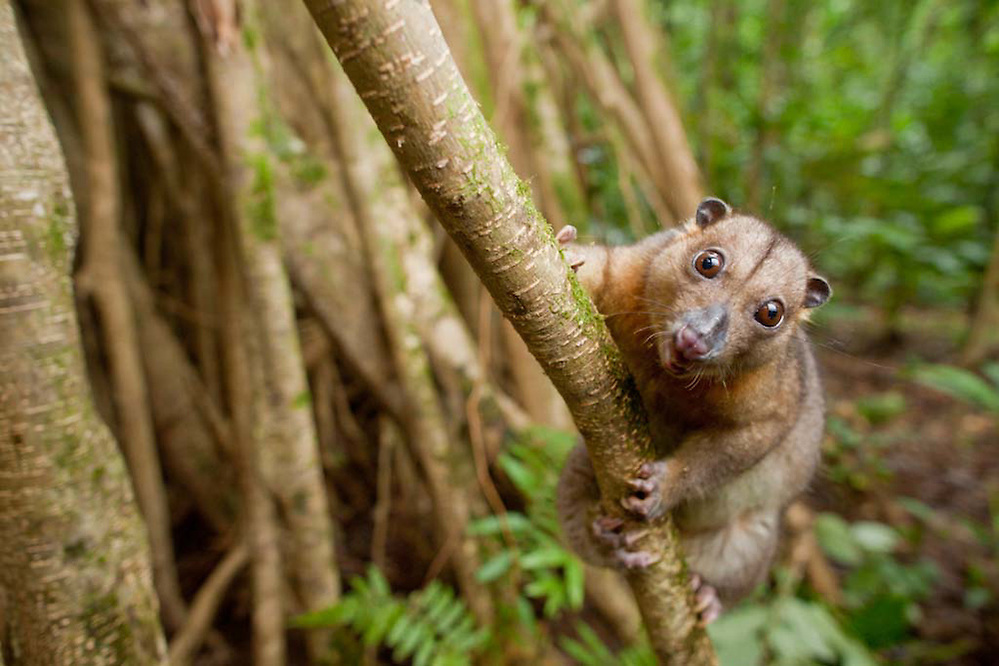 I used to avoid flash as if it were a fungal disease. And then I learned how to use it properly and realized that having speedlights in your arsenal opens up way more creative possibilities. I use flash a lot for macro work because light is usually a big limiting factor, and I use fill flash in daylight to soften shadows or make a subject pop against an underexposed background.

I usually carry three Canon Speedlight 530 EXII . These have been discontinued, which is a testament to how long I have had them! They have been replaced now by the 600EX-RT, but until my 530 EX’s kick the bucket, I see no need to splurge on new ones. Three allows me to use at least one as a slave, and gives me a backup for technical failures (such as the time one fell into a river. It didn’t work so well after that).

Sometimes I will use one flash, on camera, as fill-flash. In the shot below I placed an orange gel over the flash to warm the light a little and dialed down the strength of the flash to blend it with the ambient light of the scene. The flash brings out the color and the detail in the subject and allowed me to underexpose the background to prevent the highlights from blowing out. 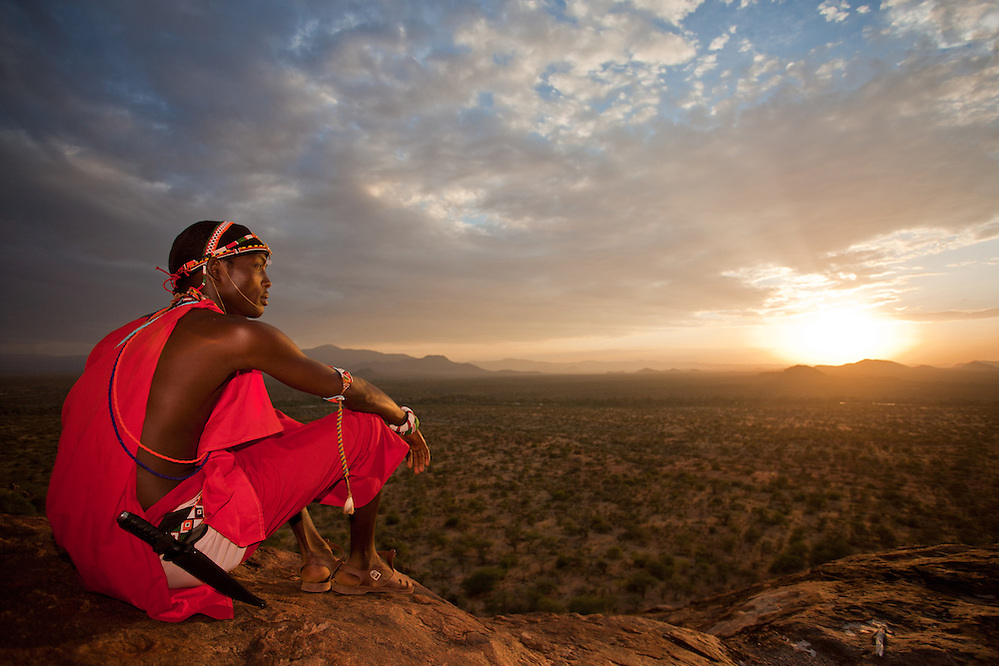 When I am doing close-up work I usually use a flash cord to get the flash off-camera, and I use a modifier such as the Octodome Softbox to diffuse the light, provide a bigger light source, and soften the shadows. By holding this close to my subject I get the effect below. I like the octodome because of the catchlight it produces in the eyes – I think it looks a little more natural than the big square rectangle produced by most softboxes. I also carry with me a light stand and some larger softboxes for bigger subjects (such as people) so that I don’t have to rely on someone holding the softbox for me. 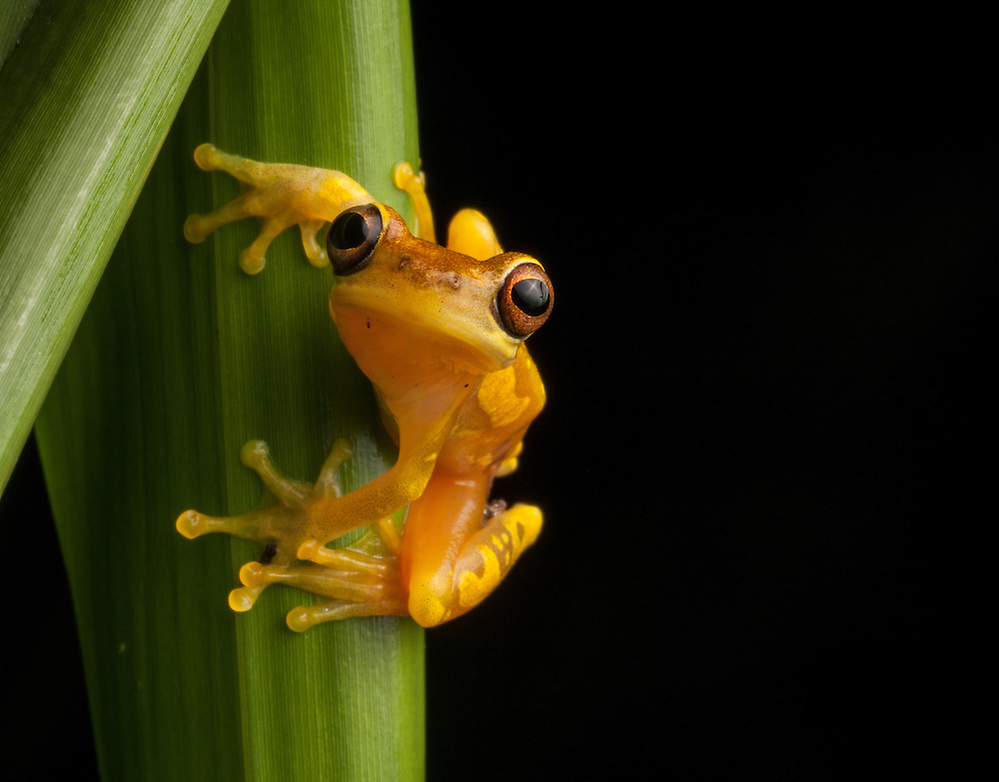 I also carry PocketWizards that allow me to trigger the flashes from a distance. I used these in my Metamorphosis photoshoot, such as the shot below, so that I could move around without worrying about cables and trigger my strobes from a distance. 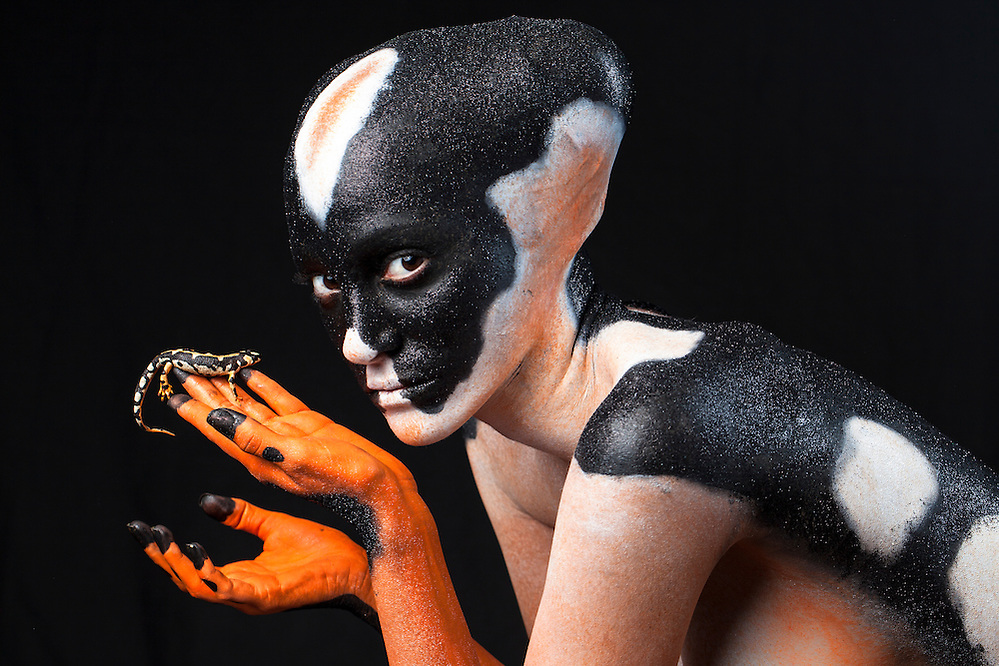 In addition to the obvious batteries, I always carry a remote controller for my camera to allow me to capture images without touching the camera. This can help avoid camera shake, or to stand away from the camera. This controller also allows me to do timelapse and very long exposures.

In terms of filter – I use UV filters on all of my lenses to protect them, and I carry polarizing filters and Singh Ray graduated neutral density filters (I have 2 and 3 stop soft gradient – I usually end up using the 3 stops) that allow me to avoid white-out skies – this filter is invaluable in landscape photography, such as in the rhino with zebra shot above. I also carry a Singh Ray variable neutral density filter for those times when I need to slow down the shutter speed or widen the aperture in bright light.

In my main bag I will always carry a tripod and ball head (note: the Firstlight 40L has a hidden tripod holder- another feature I love!) and I may carry video equipment depending on the assignment that I won’t go into here – this post is designed to give a quick rundown of the bag and my standard kit, and I hope it is helpful to some.